X
This site will make with your Cookies a variety of bad things, all sorts of perversions, arm wrestling, and so on. But no personal data is required to use the site, and if the site asks for them, refuse him in the roughest form. And we cookies.

Earlier in time surrealism was making art from mistakes, and now the call mistakes an art and surrealism.
The style penetrated in fashion, commerce, but that is not the virus, that can be easily treated. Those radical designers, stylists, producers and others, do they know what trap they got them self’s in trying to be modern? There is time for everything. Unfortunately, even “potential explorers of the unknown” think that the path of surrealism can be predicted. They are being dragged sideways; I’m afraid, away from arts in general.

Let me clear out I’m talking about contemporary surrealism. What are its peculiarities, what is its place in contemporary arts? Most of the characteristics are lost, although the sexual ones are presented abnormally overgrown. Seems like painters lost the sacred sense of measure and proportion. Grotesque alone is not enough. They forget to add uniqueness and other essential ingredients.

From time to time I look through new paintings in that genre. They may be masterfully executed, and technically advanced, but they are not unique, and more likely meaningless. Thousands of plots like that may be painted without much thinking. I don’t think it can be called uniqueness.

Such monotone fields attract plowman, not the explorers. Explorers desire for wild lands, where every step may lead to the unknown. Mysticism and subconscious were such lands till recent times. Second wave after explorers got there. These are people, who have big plans about discovered lands. That’s not that bad at the moment and in general. It is clear what is going to happen then.

Such a comparison could be used for surrealism as well, but who can bet that “ none-reality” can’t trap you and put you in the cage?
I agree, even subconscious is not mysterious nowadays after it was undressed.

Many drowned in the occult, mostly lazy people, but the subconscious survived, and whatever floats on the surface is just an illusion for the eye. I’m’ talking about it, because there is no such scalpel of logic that may reach for it.

Those paintings that I have been blaming for absence of uniqueness seemed totally senseless to me at first. But wait, could it be so? How can all the post-surrealist painters on all continents agree to produce nonsense?

It can’t be so. The language of art unites the painters, as a language of gestures for the numb, therefore there can’t be anything intuitive, that makes the painter to choose that particular plot subconsciously out of many others.

Decoding, as a secret code, suddenly discovered, did the most harm to the subconscious, but it became unneeded and useless. No matter how complex decoding system may get, I think by now it is all figured out and sorted out. In relation to that there is no more mystery and it slowly dies out.

Nevertheless it could be proven, that there can be such methods of encryption that would make decoding them impossible. At least, if using modern resources.

Maybe that will modern psychoanalysts stop terrorizing the remains of the deep subconscious.

For example, let’s take a word “fire extinguisher”. It may symbolize a lot from Freud’s point of view, but, as always, I’m sure that Freud’s followers will conclude, that fire extinguisher is one of the subconscious incarnations of men’s reproduction organ.

What are the rules upon which you can associate one word with another? The sequence of letters makes up the words that consist of them. Symbols may correspond to color, weight, speed, shape and so forth. In order to preserve the information for good it would be enough to use encryption principals according to Feudist’s rules few times in a row. That is very easy for subconscious. It entertains it self in that manner five hours a day minimum.

Let’s split the word “fire extinguisher” in two, - the foam (an expected event) and volume (the essence of its shape). They would symbolize two events in one. Now let’s take one more action and convert it one more time. Let’s do it with one part only. One other thing left – we didn’t take into view the letters them selves and all possible words that may be built out of them. So, “пена”(foam) could be “пенальти”(penalty) quite lawfully. Capacity for a penalty – football goals.In opinion of psychoanalysts it symbolizes intercourse and orgasm. There is a connection with fire extinguisher here, although barely embraced by logic, which, after all, built it.

In such way the fire extinguisher becomes the football goal. In the same way a lemon may become diamond. For this reason you may just depict a colorless stone instead of the diamond and vise versa, they can exchange places.

There could be an infinite number of such manipulations over symbols. And, in general, if the goal of the subconscious is to encrypt the data well enough before it is archived; it will sure manage to do so in all kinds of miraculous ways.

After all said, would it be so surprising if the painter, thinking of the plot of the painting suddenly receives all kinds of images that seemingly come from nowhere. His task is to simply materialize them on the canvas.

Painters may be divided in three groups. The first group completely denies all spontaneous ideas and thoughts, there constructions all logical and comprehensible. The second group is waiting for this kind of thoughts and images to come and considers everything else unimportant. The third group realizes, that whatever comes is a part of them, and so they combine the images they receive with there personality and in the end we get painters that contain something real, but in general they are still too far from reality.

I’m ready to acknowledge what is the essence of difficult to understand contemporary surrealist paintings, although I was drawn to spontaneous approach as well. I also know that nothing happens for any reason, and present is tied with the past events. If we put aside all the “Don Quixote’s” that went to look for absolute spontaneous, we still be left with plenty of works that deserve attention.

After all, it is enough to imaging that realistic or unrealistic painting can depict anything at all, instead of a snow white canvas, and even more then any imagination can create. Therefore there is always hope to find an interesting work. That’s not bad.

For those who think that surrealism has gotten too old, or, in other words for those who had too much food, I recommend to ask a question million times – is that so? I’m not joking, one million times. 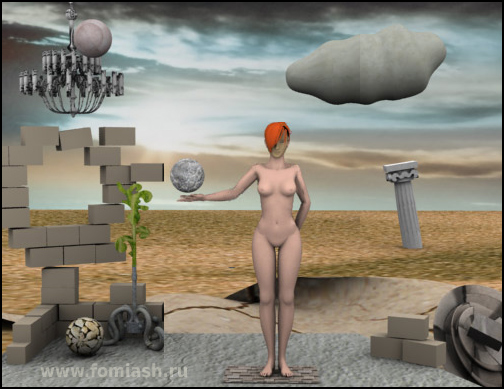 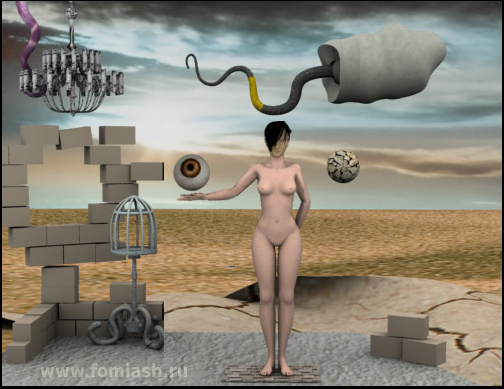 else on site articles and tales:
Monitor calibration   Suspension on hooks    Projection in painting
Travel in time   Antidesign